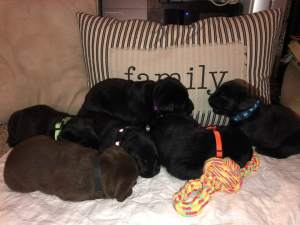 This girl is absolutely beautiful! Beautiful coat, beautiful build! She just looks like a lover!

Look at this guy! This is Brodi, the “baby Bro” His people just love him and he looks just as smitten with them.

Coopers family sent us this gorgeous pic of him! Isn’t he absolutely beautiful? His people tell us he is weighing in at 75lbs (8 months old) This guys definitely takes after his daddy! 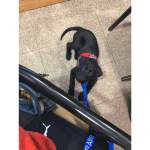 This boy is doing unbelievably well!! He is being trained as a service dog! He has already, by 3 months of age, learned so many things to assist his person! He is capable of cardiac alert, circle around (crowd control), block (stand behind handler when their back is turned), behavior interruptions for tourettes tics (he will nudge their leg with his nose and if they don’t stop he will paw at them), and medication retrieval, as well as basic obedience. Did I mention he just turned 3 months old!!! How awesome is this!!

At 3 months old he is looking a lot like his daddy! His people say he is doing great, he is so loveable and playful and an absolute joy!

Got another update on Mudge!! At 5 months old, he is almost 50lbs!! He is the spitting image of his daddy! His people say he has lots of friends and wants EVERYONE’s attention! Typical Labrador! LOL

Hazel is a huge love bug who enjoys being held all the time. Hazel knows sit and lay, working on stay and paw. She is full of energy and loves to play but enjoys snuggle time too. She sleeps through the night and is crate trained.